In May last year, actress Angelina Jolie announced she underwent a double mastectomy to reduce the risk of breast cancer after testing positive for a BRCA1 gene mutation. According to a new study, this announcement triggered a significant rise in the number women with a family history of breast cancer being tested for the mutation, and this increase persisted for the next 5 months. The research team, led by Gareth Evans of Genesis Breast Cancer Prevention and St. Mary’s Hospital in the UK, says their findings show that when it comes to health news, a story involving a high-profile celebrity can have a positive and long-lasting effect on health care among the general public. 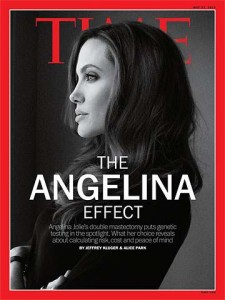 Both BRCA1 and BRCA2 gene mutations can be inherited from a parent, and they significantly increase the risk of breast and ovarian cancers, among others. Approximately 12% of women in the general population will develop breast cancer at some point in their lives, but around 55-65% of women with a BRCA1 gene mutation and 45% with a BRCA2 gene mutation will develop the disease. Jolie broke the news of her BRCA1 gene mutation and her decision to have a double mastectomy through a self-penned article in The New York Times on May 14th, 2013. “I choose not to keep my story private because there are many women who do not know that they might be living under the shadow of cancer”, she wrote. “It is my hope that they, too, will be able to get gene tested, and that if they have a high risk they, too, will know that they have strong options”. For their study, recently published in the journal Breast Cancer Research, Evans and his team wanted to see how Jolie’s announcement influenced the rate of genetic testing referrals for breast cancer among the general population.

The US Preventive Services Task Force recommend that women who have a family member with breast, ovarian, fallopian tube or peritoneal cancers be assessed to determine whether their family history of such cancers may be linked to BRCA gene mutations. Similar recommendations stand in the UK. If a woman is found to be at high risk of a BRCA mutation as a result of her family history, she will usually be referred for genetic testing. The research team analyzed data from 12 breast cancer family history clinics and nine regional genetic testing centers in the UK from 2012-13. The researchers found that in June and July 2013 – immediately after Jolie’s announcement – referrals for genetic testing increased 2.5-fold compared with the same period in 2012, from 1,981 to 4,847. A 2-fold increase remained until October 2013, after which time genetic testing referrals began to fall. Furthermore, the team found that demand for genetic testing almost doubled during this period, and there were more enquiries about risk-reducing mastectomies.

The team notes that a similar pattern was seen in Australia after news broke about singer Kylie Minogue’s breast cancer diagnosis. This led to a 40% increase in breast cancer screening. And in 1987, Nancy Reagan’s decision not to undergo breast-conserving surgery led to a 25% increase in mastectomies in the US. “All these stories, including the current one, show that health news around high-profile individuals can have a sustained effect for at least 6 months in influencing the uptake of health care”, say the researchers. They add that there was concern that Jolie’s announcement would lead to a rise in inappropriate referrals to genetic testing centers, but this was not the case. Commenting on their findings, Evans says: “Angelina Jolie stating she has a BRCA1 mutation and going on to have a risk-reducing mastectomy is likely to have had a bigger impact than other celebrity announcements, possibly due to her image as a glamorous and strong woman. This may have lessened patients’ fears about a loss of sexual identity post-preventative surgery and encouraged those who had not previously engaged with health services to consider genetic testing”. Evans adds that this encourages more women to visit family history clinics so they can find out about any gene mutations early and take the appropriate action. Although this will mean some women may need to have a mastectomy, he says that others may be advised to take cancer-preventing drugs or adopt lifestyle changes in order to reduce cancer risk. The researchers point out, however, that during the period of increased referrals, health care services found the extra demand challenging as there is no additional funding to cover such eventualities. “The increased awareness of familial cancer in the community alongside improvements in genetic testing, screening and preventative strategies, provides funding challenges for clinical genetic services and commissioners”, they add. Medical News Today recently reported on a study claiming breast cancer screening for women over the age of 70 may lead to overdiagnosis.